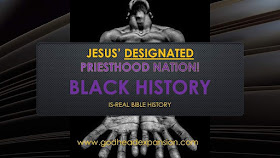 23 For as I passed by, and beheld your devotions, I found an altar with this inscription, TO THE UNKNOWN GOD. Whom therefore ye ignorantly worship, him declare I unto you.
26 And hath made of one blood all nations of men for to dwell on all the face of the earth, and hath determined the times before appointed, and the bounds of their habitation;
Acts 17:23‭, ‬26 KJV
https://bible.com/bible/1/act.17.23-26.KJV
THE LINEAGE OF SHEM, HAM, AND JAPHETH! GENESIS 10!

Noah Had Three Sons! By Them Was The Earth Repopulated After The Flood!

IF THIS SIMPLE ELEMENTARY SCHOOL PREMISE ESCAPES YOU, THE FOLLOWING INFORMATION MAY COMMUNICATE AS BEING VERY FORIEGN TO YOU AS WELL!


ITS GOOD TO KNOW HISTORY! IF YA DON'T, SOMEONE MIGHT EXCHANGE
HIS-STORY FOR YOURS!


GOTTA BE ONE OR THE OTHER!


(the male carries the seed)!


HE WAS WHITE-GENTILE OR EDOMITE! 🤔 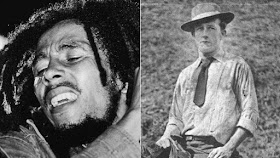 AND THIS IS HOW DEEP THE CONFUSION RUNS!
https://atlantablackstar.com/2019/02/08/high-school-coach-who-spurred-controversy-in-bob-marley-blackface-costume-fired-after-refusing-to-resign-offered-shot-at-return/

I KEEP HEARING ABOUT WHO FREDRICK DOUGLAS WAS OR WHO HE WASN'T! THERE ARE SOME WHO EVEN CLAIM BLOOD ANCESTRY!


ITS GOOD TO KNOW HISTORY! IF YA DON'T, SOMEONE MIGHT EXCHANGE
HIS-STORY FOR YOURS!


(the male carries the seed)!


Separated as an infant from his slave mother (he never knew his white father). 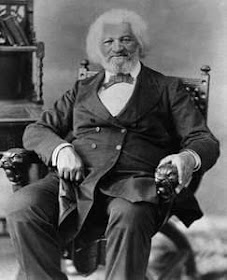 BE CAREFUL WITH DOLING OUT YOUR DNA TO STRANGERS!

And Moses and Aaron took these men which are expressed by their names:  And they assembled all the congregation together on the first day of the second month, and they declared their pedigrees after their families, BY THE HOUSE OF THEIR FATHERS, according to the number of the names, from twenty years old and upward, by their polls.

BUT LETS GO BACK AND TAKE A LOOK AT NOAH AND HIS SONS!

Now these are the generations of the sons of Noah, Shem, Ham, and Japheth: and unto them were sons born after the flood. 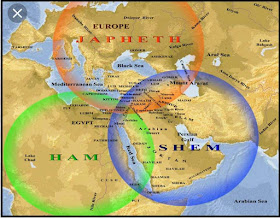 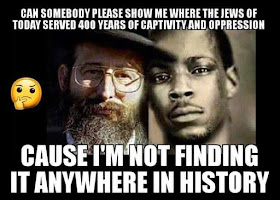 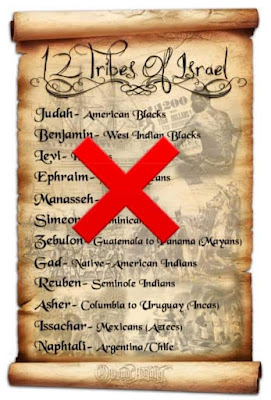 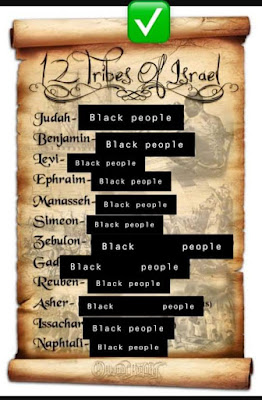 CHILDREN of the Covenant with (GOD!) 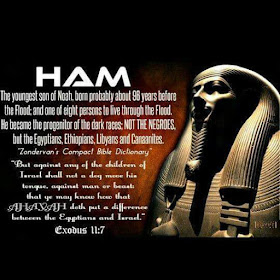 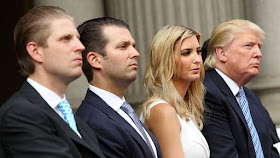 Concerned less with where they settled:

SPEAKING OF THIS CREATION!!


These are the families of the sons of Noah, after their generations, in their nations: and by these were the nations divided in the earth after the flood.

I've read where some have said;  "what difference does it make"?

This is partially why it is important!

WAKE UP AND GO GET YO DAMN KIDS OFF DA STREETS!
http://thegodheadexpansion.blogspot.com/2017/03/wake-up-and-go-get-yo-damn-kids-off-da.html

Speaking of Jerusalem in 70 ad!

Luke 21: 24 And they shall fall by the edge of the sword, and shall be led away captive into all nations: and Jerusalem shall be trodden down of the Gentiles, until the times of the Gentiles be fulfilled.

Brothers and sisters this indicates a time in the future and dates
(God's Priesthood NATION)
Israel's
Restoration to the land of Israel!!!!!

Isaiah 11: 6The wolf also shall dwell with the lamb, and the leopard shall lie down with the kid; and the calf and the young lion and the fatling together; and a little child shall lead them.

7And the cow and the bear shall feed; their young ones shall lie down together: and the lion shall eat straw like the ox.

8And the sucking child shall play on the hole of the asp, and the weaned child shall put his hand on the cockatrice' den.

Zechariah 10: 6And I will strengthen the house of Judah, and I will save the house of Joseph, and I will bring them again to place them; for I have mercy upon them: and they shall be as though I had not cast them off: for I am the LORD their God, and will hear them.

NONE OF THOSE THINGS HAVE HAPPENED! 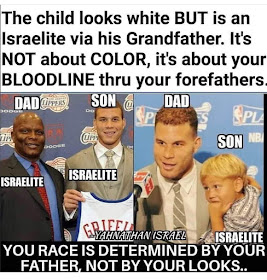 Did you know, the Descendants of each one of Noah's sons have had a time to rule on the earth?

Can you now guess which one of Noah's son's descendants currently rules the Earth? And will be the last of mans rulership which is about over!

WHO ARE THE GENTILES?

HOW DID "BLACK PEOPLE"
(NEGROS) GET INTO THE LAND OF HAM-AFRICA?

How Did Black people Get into Africa, the Land of Ham, another black people?
We all know about the Exodus from Egypt. And how Pharaoh who we all know was "black", thought that Moses was his Grandson who was also "black". But did you also know that the Assyrians that also took Israel captive after the Exodus from Egypt (about 720 BC), were the descendants of Ham the modern day Africans too? Noah's 2nd oldest son. Just like the Egyptians-Hamites-African.

Genesis 10: 6And the sons of Ham; Cush, and Mizraim, and Phut, and Canaan. 7And the sons of Cush; Seba, and Havilah, and Sabtah, and Raamah, and Sabtecha: and the sons of Raamah; Sheba, and Dedan. 8And Cush begat Nimrod: he began to be a mighty one in the earth. 9He was a mighty hunter before the LORD: wherefore it is said, Even as Nimrod the mighty hunter before the LORD. 10And the beginning of his kingdom was Babel, and Erech, and Accad, and Calneh, in the land of Shinar. 11Out of that land went forth Asshur, and builded Nineveh, and the city Rehoboth, and Calah,

Asshur are the Assyrians!

(Samaria is a province of Israel).

11And the king of Assyria did carry away Israel unto Assyria, and put them in Halah and in Habor by the river of Gozan, and in the cities of the Medes: 12Because they obeyed not the voice of the LORD their God, but transgressed his covenant, and all that Moses the servant of the LORD commanded, and would not hear them, nor do them.
Many are still among the Hamites today!


THE tribe of Dan, Falashas in Ethiopia!

Isaiah 11: 11 And it shall come to pass in that day, that the Lord shall set his hand again the second time to recover the remnant of his people, which shall be left, from Assyria, and from Egypt, and from Pathros, and from Cush, and from Elam, and from Shinar, and from Hamath, and from the islands of the sea.

(All of those are black nations! The Islands of the sea? That would include America.)

Micah 5: 3Therefore will he give them up, until the time that she which travaileth hath brought forth: then the remnant of his brethren shall return unto the children of Israel.

6And they shall waste the land of Assyria with the sword, and the land of Nimrod in the entrances thereof: thus shall he deliver us from the Assyrian, when he cometh into our land, and when he treadeth within our borders.

But they did NOT take the tribe of Judah!

2 Kings 18: 13 Now in the fourteenth year of king Hezekiah did Sennacherib king of Assyria come up against all the fenced cities of Judah, and took them. 14And Hezekiah king of Judah sent to the king of Assyria to Lachish, saying, I have offended; return from me: that which thou puttest on me will I bear.

And the king of Assyria appointed unto Hezekiah king of Judah three hundred talents of silver and thirty talents of gold. 15And Hezekiah gave him all the silver that was found in the house of the LORD, and in the treasures of the king's house. 16At that time did Hezekiah cut off the gold from the doors of the temple of the LORD, and from the pillars which Hezekiah king of Judah had overlaid, and gave it to the king of Assyria.

35And it came to pass that night, that the angel of the LORD went out, and smote in the camp of the Assyrians an hundred fourscore and five thousand: and when they arose early in the morning, behold, they were all dead corpses.


FOR THOSE WHO HAVE A PROBLEM WITH SCRIPTURES...

Jerusalem was also besieged,  in 701 BC-the occasion on which, in the words of Byron poem,


'The Assyrian came down like the wolf on the fold'. Sennacherib extorted tribute from 'Hezekiah; cut off the gold from the doors of the temple of the Lord and from the pillars, and gave it to the King of Assyria'. Inscriptions in Sennacherib's own palace boast of how he shut up Hezekiah 'like a caged bird'. But the Assyrians failed to take Jerusalem before plague forced them to withdraw.


The descendants of Esau, Jacob's fraternal twin brother, would have the world think they are all of the tribe of JUDAH (Jews)!

The WORD of GOD,
as demonstrated, clearly indicates where the Lord sent his PRIESTS in CAPTIVITY!!

WHERE ARE THE CAPTIVE HEBREW ISRAELITES TODAY?

The 9 Tribes of Israel were taken as captives and are among the (Africans) Ham & the (Arabs) Ishmaelites.

The 3 Remaining Tribes returned to rebuild the Temple.

And were later taken as captives by the Gentiles:

TOTALING THE TWELVE (12) TRIBES OF ISRAEL!

Africans - Hamites were and are today the captors of other "black" people (Israelites) too!

1 Peter 2: 9 But ye are a chosen generation, a royal priesthood, an holy nation, a peculiar people; that ye should shew forth the praises of him who hath called you out of darkness into his marvellous light:


3Behold, I will corrupt your seed, and spread dung upon your faces, even the dung of your solemn feasts; and one shall take you away with it.

Isaiah 42: 23Who among you will give ear to this?who will hearken and hear for the time to come?

24Who gave Jacob for a spoil, and Israel to the robbers? did not the LORD, he against whom we have sinned? for they would not walk in his ways, neither were they obedient unto his law.

25Therefore he hath poured upon him the fury of his anger, and the strength of battle: and it hath set him on fire round about, yet he knew not; and it burned him, yet he laid it not to heart.﻿


ISRAEL, THE DESIGNATED PRIESTS OF GOD UNDERSTAND AND TEACH THE FATE OF EVERY NATION!

(And the clock is ticking)

ALL PEOPLE HAVE THE OPPORTUNITY TO BECOME THE ADOPTED OF GOD THROUGH JESUS THE CHRIST!

That's Pre-Tower of Babel, All One Lineage of People!

THE ELOHIEM!
WHAT IS THE GODHEAD?

(That Is When It Will No Longer Matter!)


TEACH YOUR CHILDREN HISTORY!
TEACH THEM THE FUTURE!